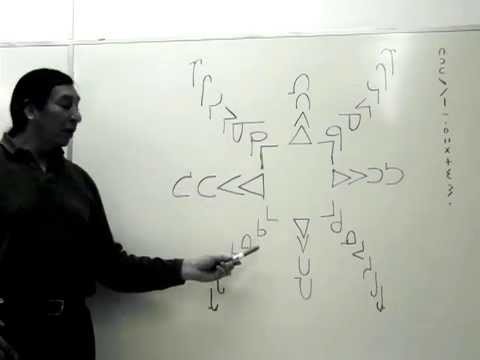 Lately, I’ve been working on language technology for Plains Cree. Plains Cree is primarily written in two systems: standard Roman orthography (SRO) and syllabics. Since SRO uses the Latin alphabet—just like English—it is rather straightforward to type on a standard Canadian English keyboard. Syllabics keyboards are an ongoing struggle, however (I may expand on this some other time on this blog). Therefore, if one wants to write Cree in syllabics, it is sometimes easier to type it in SRO first, then use a transliterator to convert from SRO to syllabics.

In summary, I created a new bidirectional transliterator called cree-sro-syllabics (Edit: Try it online at syllabics.app!). It’s a new transliterator, because several transliterators already exist. So what do the others look like?

What are the freely available transliterators?

A quick Google search will net you at least the following SRO to syllabics transliterators.

However, none of these transliterators are perfect.

In syllabics, a word that ends with an “hk”—or “ᐦᐠ” in syllabics—are supposed end with “ᕽ” instead. However, this replacement can never occur in the middle of a word.

For example, the word “ê-wêpâpîhkêwêpinamâhk” (“we (and not you) are setting it swinging”), contains both a final “hk” and a “hk” cluster in the middle of the word. Its syllabic transcription is ᐁᐍᐹᐲᐦᑫᐍᐱᐊᒫᕽ.

Although the Algonquian Linguistic Atlas’s converter and syllabics.net’s converter both handle this, the Maskwacîs Converter does not, instead producing ᐁ ᐁᐧᐸᐱᐦᑫᐁᐧᐱᓇᒪᐦᐠ, with an erroneous “ᐦᐠ” cluster at the end.

Some transliterators attempt to convert every Latin character, even if it doesn’t make sense. Take the case of “Maskêkosihk Trail”—a road that goes from Edmonton to Enoch Cree Nation. The City of Edmonton unveiled the street sign, and, in the process, they unveiled an embarrassment: 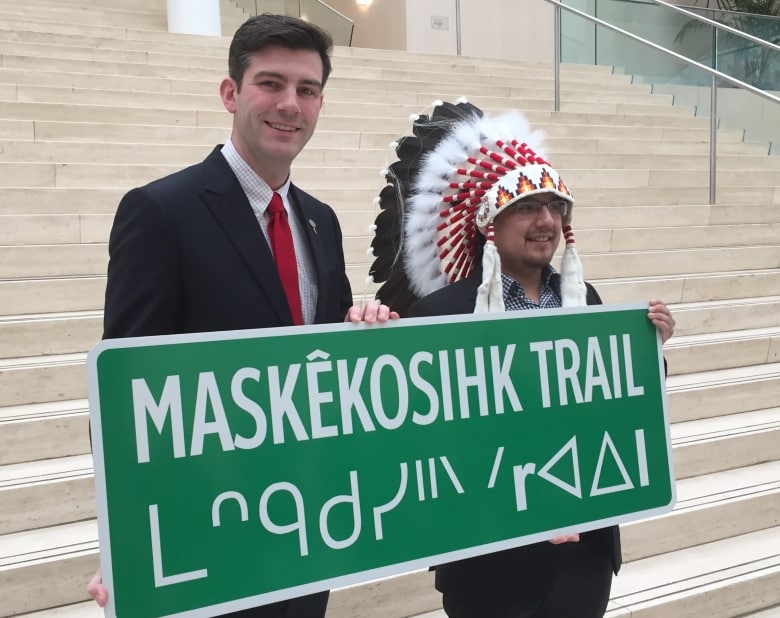 Not only does the syllabics transliteration of the sign contain the “hk” error as mentioned above, but it half-transliterates the English word “trail” into syllabics. The result is that “trail” is rendered as “ᐟrᐊᐃl”, which contains Latin characters in the transliteration!

Long vowels (âêîô) are distinct from short vowels (aio) in Cree. Long vowels are written with a dot above in syllabics. The exception is for “ê” because it is always long; as a result, some writers also drop the diacritic when writing “e” in SRO as well. It’s important to differentiate between long and short vowels, because it makes distinctions between words. For example, nipiy/ᓂᐱᕀ means “water” while nîpiy/ᓃᐱᕀ means “leaf”. However, there is such a thing as “plain” script, where the vowel dots are omitted, and pointed script where the vowels have all dots.

Another complication is that the “standard” Roman orthography in practice has multiple conventions for writing long vowels: using a macron (◌̄) and using a circumflex (◌̂).3

Other odds and ends

Other issues for syllabics converters include how they deal with dashes, how they deal with combining diacritics, rather than pre-composed characters, and whether they produce the correct Unicode characters for the syllabics rather than very convincing look-alikes. There’s also the sandhi orthographic rule, but honestly, I’m not sure I fully comprehend how to apply this rule myself.

Here’s a breakdown of the previous issues, and whether each transliterator can handle it correctly.

The most pressing issue to me personally is that I cannot find source code for any of these converters! This means that if other people want to incorporate a converter into their own app without an active internet connection, they can’t. They have to either reverse-engineer the converters online, or write their own code to do the conversion.

cree-sro-syllabics: an open-source Python and JavaScript library for syllabics conversion

My solution was to create a Python library that is free and open source.

It handles all the issues previously mentioned. Try it with the following test cases:

The source code for cree-sro-syllabics can be found on its GitHub page, but it can also be seamlessly incorporated into a Python project that uses pip by installing it with:

Or you can copy-paste the .js file to your project (as long as you keep the AGPL license comment at the top!)

I hope in future versions to add support for Woods Cree and other West Cree dialects. There are also a few interesting things that can be done to make sure SRO and syllabics conversions can be completely reversed without losing information about morpheme boundaries.

EDIT: (2018-12-06) In the original post, the library was called crk_orthography. It has been renamed to cree-sro-syllabics.